Water Ways: recounting events drawn from meticulous notes and some actual quotes from writing as a nine-year-old covering the news of a backyard flood in 1982.

The sounds of splashing and quacking seemed unusually close as the cool morning breeze swept under the book-wedged window sill. A divine symphony of rain, thunder, and lightning had me captured and I watched it all through the night; mesmerized by the beauty of the clashes of water to earth, of rain to river, of lighting to ground; striking the boldest lone trees.

I had fallen asleep to this furious night, dressed enough to leave and explore as soon as light could break. The momentary blinking glimpses that lightning teased me with were disjointed spooky snapshots during the night. Stretching my limited knowledge base, I wondered what the storm brought to the land I grew on and how the creatures faired. As I watched the river consume most of the back yard in just one night, it was thought-provoking. Storms must be the masters of change. I felt very learned to finally understand when some would say “nature is unleashed” It remains to be determined whether or not we can cope better with this humbling truth of undeniable power by insisting we have control over her.

A crooked grin came from the anticipation inside me, when my foggy eyes were rubbed clear, finding the ducks that had woke me while they were busy claiming and arguing over new kingdoms they had discovered. I flew out of the house in my much-practiced routine that would allow me to get to the back yard in fewer steps than most would think possible; swinging like the ancient ancestors around the steel banister and railing and purposely leaving behind the boots that wouldn’t let me take it all in. I smelled the wet earth, the slight smell of rotting worm corpses, and the air was warm and damp inside me.

I slowed after getting to the side of the house, so I would be sure to take it all in deliciously. I surprised the arguing ducks and they nearly clipped me taking off clumsily out of the water. “That’s what happens when you get in your own little world” I repeated in my head, having heard it more than most others may have. I felt compelled to honor the fowl with such wisdom and excusing my impetuousness was like hitting two birds with one stone. (winks) On my own and by direction, I learned that if you were getting lost in observing the world around you, then you had also set yourself up to be surprised and amazed. “Look closer” echoed and rewarded me too often to stop.

I hesitated just long enough to prepare for the coldness of the edges of the flood-scape, finding quickly that I could not prepare fully for the entirety of the sensations I was to experience. With baggy hand-me-down jean pants from my brother tediously rolled up, I nabbed my favorite willow branch walking stick; the one that curved over my head in a graceful half gothic arch. It was wedged in the bush besides the garage, just as I had left it after the baby snake adventure. As I moved slowly through the calf-deep invading waters, I could feel the worms between my toes in the coldness and the hairlike blades of grass sliding underfoot. Spongy ground made muddy clouds swirl in the water wherever I stepped. It is good to see the ripples one makes, I thought. I carefully tested muddy earthy and grass and got used to how it made me slip, after a few mud-slapping spill anyways.

As I turned around the garage toward the river in the back yard on the usual path, I could see that mum’s flower garden was on higher ground, mostly. The river was swollen and had flooded the yard more or less to my knees; leaving things soaking that should not. Many worms perished. Many fish feasted and swam around the willows they may have only seen from one angle before. Fish tangled with the worms and branches dangling together as they could have never imagined likely. “See as much as you can and remember it; moments are short and get shorter” I could hear a memory of grandma proudly laughing at me watching ants with my bellow down in the dirt. So far, I kept my promise.

It was my knowledge of the yard in such detail, that kept me from falling completely to the depth of the river. The delineation between shallow yard and deep river was only subtle to those who did not love this land. It seemed more dangerous to those who did not understand this loving familiarity, which is why the police officer on the bridge had invaded my sacred space, causing me to slip a little on a slimy branch beneath my foot. Irritated, I was envious of the ducks who had the option of flight when startled from their concerns. I was just nine and although a little unnerved by his badged authority, I was also very stubborn and independent being one of the few girls in the boy infested neighborhood. This was by no means the first flood I had rolled my pant legs up for, and a little defiance was at my ready mark. He commented that it is difficult to see where the yard ended and the river began, and he was concerned that I should be cautious. “I don’t need to see where the edge is, I know where the edge is, I live here!” one bushy cop eyebrow raised and I realized that I was talking back to an officer of the law. “…but thanks, anyways!” I quickly added for a better impression of respect. He didn’t seem pleased; perhaps a little annoyed at my unappreciative comment, yet still amused by my confidence. “Alright then, be careful still.” I nodded my head quickly and resumed scanning the water at my feet as a grey Carp with big intricate scales slid past my leg. I could feel the officer lingering and I refused to look back up. Snapping turtles could be out here and I needed to be looking and poking in front of me with a stick before I walked. I could also sense greater depths or ledges with the thick broken weeping willow branch. Realizing he probably could be better off offering help to those who did really need it or at least want it, and he wasn’t about to wade in that to get me if it wasn’t necessary. “Officer Eyebrow” as I dubbed him silently, left quickly enough for me to not get too distracted and I sighed heavily before carrying on.

The ducks made a splashdown by the Tiger lilies rimming the sugar maple trunk like a wreath in the water. A small tire floated by with its own garden of grass and flowers accidentally planted in its attached rim. The ladybug on its grassy mast whispered, “Ahoy!” and a pocky sour apple from our orchard bobbed into my knee on its way downstream, spinning. A Great Blue heron landed just three canoe lengths away from me and I froze. We were both happy that neither of us said a thing. We met eyes for a moment and with some strange understanding, we kept moving through the water. When he, almost gracefully, took a fish and tipped it back, I had to smile. Poor fish, but a good day to be a heron who shuffled on as wide-eyed as I. Him with his stick-like legs and me with my legs and stick.

Sometime in that early summer morning, this victory of water had bolstered my confidence. I decided that I should never like to be far from at least a small natural waterway. It wasn’t until years later that I had realized that nothing, no other being or force, could affect me as water did. Beyond common and simple sustenance, waterways were my first mirrors that could see, feed and heal me. Holy water is all water. It is in my river full of fish (and sometimes worms) and falling from the clouds in spatters and frozen lace and carrying boats of friends and family, and carrying me to inner peace and power, even if at times, just in my shower. -JET 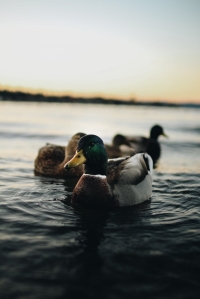